A hereditary cancer syndrome is a genetic disorder in which inherited mutations in various genes predispose individuals to the development of cancers such as breast, ovarian, colorectal, endometrial, gastric, prostate, pancreatic cancers, and melanoma. These form approximately 5 to 10 percent of all cancers. Currently genetic mutations associated with over 50 hereditary cancer syndromes have been classified and family members harboring these changes can be identified through genetic testing.

Most cancer syndromes are inherited through autosomal dominant pattern. The mutated gene is a dominant gene located on one of the non-sex chromosomes (autosomes). Only one mutated (affected) gene is needed for manifestation of symptoms.

Unique genetic information about cancer can be obtained to help in making treatment recommendations. Information that can be obtained from targeted sequencing and mutation analysis may include prognostic indicators, improved disease classification, additional therapies, or relevant clinical trials.

The genetic basis of HBOC is a germline (inherited) mutation in either the BRCA1 or BRCA2 genes. Normally, the proteins produced by the BRCA1 and BRCA2 genes prevent cells from becoming malignant by aiding in the repair of mutations in other genes through a process known as double-stranded DNA repair. Therefore, an inherited mutation in either of these genes, also known as tumor suppressor genes, greatly increases the probability of malignant transformation and cancer. Approximately 7% of breast cancer and 11 – 15% of ovarian cancer cases are caused by BRCA1 or BRCA2, which are inherited in an autosomal dominant pattern. When assessing hereditary cancer risk, a patient’s personal and family history is collected to investigate the risk for HBOC. Once a patient is identified as being at increased risk of HBOC, genetic test results provide the most accurate means of cancer risk assessment for a patient.

EndoPredict® is the only test of its kind to combine the established clinical prognostic factors of tumour size and lymph node status with the genetic fingerprint of the tumour (EP score) into the «EPclin Score». As could be demonstrated in numerous clinical trials, this combination provides valuable additional prognostic information to make an informed treatment decision.

The BRACAnalysis® test assesses a person’s risk of developing hereditary breast or ovarian cancer based on the detection of mutations in the BRCA1 and BRCA2 genes.

Optimal management of clinically localized prostate cancer presents a unique challenge to physicians, because it is a highly variable and often slow growing, non-aggressive cancer. While, clinical parameters, such as the Gleason score and PSA levels continue to serve as the standard measurement for prostate cancer severity, they do not measure the true hallmark of cancer — cell proliferation. As such, traditional measures for assessing prostate cancer risk don’t provide all the information needed to appropriately weigh treatment options.

Prolaris®, a novel genetic test for prostate cancer from Myriad Genetic Laboratories, combines traditional risk factors with a molecular assessment of the aggressiveness of an individual patient’s cancer. Prolaris® provides unique information about a patient’s cancer and can help doctors make the most informed treatment decisions.

Prolaris® testing assesses the prostate cancer aggressiveness in conjunction with other clinical parameters.

Melanoma is a cancer arising from the pigment containing melanocytes of the skin. The risk factors for skin cancer include increased exposure to UV radiation from natural sunlight or artificial sources. There are approximately 70,000 new cases of melanoma diagnosed every year. When diagnosed early, it is curable, but delayed diagnosis often proves fatal. The skin lesions appear on the face or other sun-exposed areas and can take 5-15 years before they become invasive.

The risk factors for Hereditary Melanoma include exposure to UV radiations, fair skin, numerous moles and family history of Melanoma. Approximately 10% of these melanoma cases are hereditary. This lays stress on genetic testing to look for gene mutations correlated with increased risk for the development of Melanomas. Inherited mutations in the p16 tumor suppressor gene are considered to be associated with increased occurrence of Melanomas. Genetic Testing with MELARIS® helps for early identification of risk of developing Hereditary Melanoma, for surveillance to detect transformation into cancer, or adopt lifestyle modifications to prevent/delay cancer occurrence. In addition, negative tests for genetic mutations would avoid unnecessary interventions in individuals with positive family history of skin cancers.

myPath® melanoma is a test developed by Myriad Genetic Laboratories that measures a person’s risk of developing hereditary melanoma. 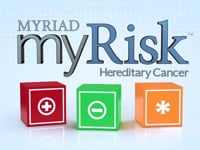